Response to the statement of liability and the joint statement 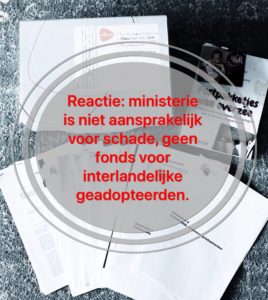 On June 4, 2021, I finally received a response from the Minister for Legal Protection in a letter to the written (repeated) statement of liability and the joint statement of March 25, 2021. In short, it's a rejection.

Extremely disappointing, but somehow it was to be expected. The minister sees no legal ground for funding individual searches for international adoptees who have a search need, and will not open up a (damage) fund that should provide for the costs of financial compensation for international adoptees to promote roots searches, truth-finding and identity restoration. He wants to establish a national expertise center.

36.4 million euros for the expertise center, not for individual searches

In his response, the minister writes that an amount of money has been made available for the national expertise centre. I knew that already, because he announced this on May 12th in his response to questions about the policy response to the Joustra Committee Report [LINK]. In fact, I was even shocked by the amount that was released for this. It concerns an amount of 36.4 million euros that will be deployed over a period of five years, while apparently not one cent will be spent on individual searches.

The expertise center will, however, offer support to adoptees who undertake a roots-search. How does the minister has it in his mind exactly when it comes to concretely and adequately helping an adoptee further in a roots-search? With the offer, in broad terms access to adoption files, information about searches, psychosocial help and legal support - a large group of adoptees is not helped.

Not for roots-searching, truth-finding and identity recovery

The national expertise center is probably be able to contribute something when it comes to support in answering ancestry questions, but how the national expertise center can and will contribute concretely to roots searches, truth-finding and identity restoration is completely unclear. The budget for the expertise center is not intended to pay for individual searches, as is also clear in the response to the liability claim. What kind of support can this group of adoptees still expect if no money has been made available for the actual search for biological relatives in the country of origin? For example; when it comes to access to adoption files for adoptees who already have an adoption file in their possession, are not helped in a roots-search at all. And when it comes to legal support, does that mean that an adoptee can change his or her name or false date of birth to the correct date of birth free of charge? Adoptees can ask questions about these topics, but that seems to be the end of it. Furthermore, it is not at all transparent to whom or to what exactly the amount of 36.4 million euros is spent.

Incidentally the establishment of the national expertise centrum will take a lot of time. And the minister also wants to collect the knowledge and expertise available at country-specific interest groups, such as already existing foundations like Mijn Roots, Plan Angel, Shapla Community and many others. These organizations helping adoptees in their individual roots-searches for years. This gathering of all knowledge takes a lot of time, and many adoptees do not have that time.

It is also not unimportant that the country-specific interest organizations have been working independendly for several years, and have build up their expertise and network in both the Netherlands and the country of origin, in their spare hours next to their own familylife and/or work. In fact, they are asked to transfer all their knowledge from their (field) research to a national expertise center about which little or nothing is known as yet. And what will the expertise center do with the information? There is a risk that certain information will not be properly used, as the officials of the ministery or other involved parties have not studied the culture of the countries of origin.

The minister also stated that every adoptee has his own story and need regarding a quest and that every quest has its own interpretation, in which it is up to the adoptee himself. They can contact the country-specific interest group. But that's nothing new. The point is that the adoptee who knocks on the door of such an interest group, he still has to pay for a search. There are always costs that need to be covered. It is true that a budget of 25,000 euros per country-specific interest organization has recently been made available - which, incidentally, is first provided as an advance - but that budget is not allowed to be spent on everything that has to do with roots searches. The minister has expressly determined this in the subsidy scheme for interest groups for intercountry adoptees [LINK]. In short, the group of adoptees concerned is still empty-handed.

Legal basis does not have to be decisive

As the Minister for Legal Protection himself indicates with regard to the suspension of current adoptions, intercountry adoption has a “pull effect” when it comes to children who end up in a children's home. This is exactly what happened to children who entered the Netherlands for adoption in the past. The possibility of adopting a foreign child created that attraction. A perverse incentive arose to maintain the market of supply and demand for children. The Dutch government let the “free market in children” take its course, did nothing with signals about child robbery, falsification of birth certificates and waivers, did not control and supervise the huge amount of Dutch adoption intermediary (also of which they knew they were not bona fide), and continued to issue principle permissions to adopt a child, entry visas and residence permits under its responsibility.

I had hoped that something could be achieved for the collective, and that the ministry would move in a positive way with the outcome of the report of the Joustra Committee, so that the individual adoptee does not have to go to court. Although the minister has declared that he will no longer invoke the statute of limitations for claims, that is only one threshold in a legal procedure. Legal proceedings will be a long and emotional process, and the adoptee will once again face costs. I had hoped that there would be a willingness to open a (damage) fund for at least starting amount. But apparently the ministry wants ready-made evidence for each individual before admitting any liability, and then the judge has to rule on it. However, a judge will look at whether a number of (legal) criteria have been met, which are tough, especially when it comes to the collective aspect (in this case all adoptees with a search need from a certain country). So it doesn't get any easier. Many adoptees have only a suspicion of fraud, through circumstantial evidence. Even though it's pretty strong circumstantial evidence in my opinion, there's a possibility that it won't be enough for a judge to rule on liability for damages.

It feels quite unfair as it has been proven that many intercountry adoptees are in possession of false documents and as a result are unable to find out the truth around their adoption. They never asked for that. They were not protected as children. And on the other hand, there are biological parents who have lost their child, and have not asked for it either. Human rights have been violated. However, the fact that the Dutch government has made mistakes in the past and acted negligently in adoption procedures is apparently not a sufficient ground for liability for (past and future) damage.

Coulance is a loaded concept

And why can't individual searches be (partially) funded? The minister still believes very strongly that the establishment of a national expertise center for intercountry adoptees - in line with the recommendations of the Joustra Committee - offers an appropriate form of support for all adoptees in their background search. The Joustra Committee has made no further recommendations in the context of legal guilt and legal liability. Can I read in it that if the Joustra committee had made recommendations in this regard, the minister would have paid for the costs of roots searches?

Yet, I haven’t read any reason from the minister other than - even after the conclusions of the Joustra Committee - he sees no grounds for legal liability. He is probably afraid of setting a precedent, fearing arbitrariness and unequal treatment. There is, of course, a certain tactic behind it. If the ministry were to bow now, it would of course recognize liability for every case brought before it, as well as for the appeal case of Dilani Butink (adopteer from Sri Lanka). But is that bad?

Incidentally, in my opinion, acknowledgment of liability is not at all necessary to set up a (damage) fund in any case to promote roots quests, truth-finding and identity recovery, for those adoptees who need it. And not all of them have that.

Earlier this week, in connection with the upcoming Adoption Committee meeting on 9 June 2021, I wrote to Member of Parliament Michiel van Nispen (SP) again, this time with my concerns about the design of the national expertise center [LINK]. Hopefully he can draw attention to some questions I'd like to see answered. I have also put similar questions to the project team of the Expertise Center for Intercountry Adoption that is involved in setting up this expertise centre. In any case, one question has already been answered: the expertise center will not concretely help an adoptee from A to B in his search!

The apologies are made, but the minister does not add concrete actions to his words when it comes to the restoration of rights. In any case, the adoptee will have to pay for the costs of finding the truth himself, and for the time being also the costs for identity recovery. You don't do a roots quest from behind a desk at seventeen high, but in the field. It is clear that the minister still does not understand what a search for parentage data and for biological relatives in the country of origin entails, and what it does to an adoptee. For some, they are solving a crime. Incidentally, he did not comment further on the 105 stories I had sent, except that he finds it distressing for the adoptees who have become victims of child trafficking. And so we have to deal with that.

What now? I'll think about that for a while. To be continued...

Click here for the letters regarding the written liability and joint statement (Dutch).

» Presentation - The struggle for recognition and justice - Adoptees rights